The truck driver shortage represents one of the greatest threats to the shipping and logistics estimations for the number of truck drivers missing range from 48,000 to 1 million, but the actual shortage has been centered around 30,000 drivers annually for the past few years. According to an industry analyst, Noel Perry, reports Frank Morris, the truck driver shortage will probably settle around 100,000. Yet, the American Trucking Association, reports Bob Costello and Rod Suarez of SupplyChain24/7, expects the trucking companies will need to hire 89,000 new drivers annually to eradicate the shortage.

Rather than trying to figure out what is and is not causing problems, you need to know a few basic facts about how the truck driver shortage will evolve in 2016.

Turnover Rates Are at an All-Time High

The trucking industry has a 100-percent turnover rate, which reflects the highest turnover rate in the industry throughout history. On the surface, this seems like every driver that begins working stops and is replaced within one year from the hiring date. In reality, this high turnover rate reflects the number of drivers who must be hired and who eventually leave before obtaining a long-term driver. In other words, four people may apply, but only to stay beyond one year. Out of the remaining two drivers, one driver eventually quits.  As a result, the company must spend more money to find, train and retain the other three, originally-needed drivers.

Driver compensation is one of the primary driving factors in the driver shortage. In 1980, truck drivers made $38,618 annually. If that wage had grown with inflation, today’s truck drivers would make more than $111,000, explains SupplyChainDigest. Yet, today’s drivers’ average pay is only $54,000 annually.  From May 2014 to January 2016, many trucking companies increased their wages. However, the largest reported increases, such as $10,000 increases at Werner Enterprises, are not even close to bridging the gap between today’s actual wages and what truck driving wages would have been if they had kept up with inflation.

The following graphic, created by Overdrive magazine, shows trucking wages since 2000 in relation to the median household income in the U.S.

The red line indicates the median wage, which is slightly elevated than what most believe due to an increasing number of dual-income households and top wage earners, explains Todd Dills of Overdrive magazine.

Drivers Will Drive for Fewer Hours to Meet Regulations

Historically, truck drivers have had and unparalleled amount of freedom in determining how many hours they drive, but regulations are becoming more stringent. According to Ryan Peterson of TechCrunch.com, drivers are restricted by law from driving more than 11 hours per day without taking an eight-hour break. As a result, today’s truckers are trying to drive faster to get more miles in in a shorter amount of time. While this may seem like a minor aspect of the truck driver shortage, it is actually responsible for cutting the number of driving hours in half across the industry.

These regulatory requirements are also going to further harm the trucking industry as the use of speed limiting devices results in fewer miles within the same amount of hours. Since many of today’s shipments result in truck driver wages per mile, not by our, truckers will be more apt to look to other industries where they can make more money.

Number of Female Drivers Will Increase

Trucking has many stereotypes about what a typical truck driver should be. Out of all these stereotypes, the issue of female drivers comes to mind. Throughout the us, female workers make up 47 percent of the labor force, reports Jaclyn Trop of Trucks.com.  However, female truckers make up only 6 percent of all truckers in the industry. Unfortunately, the male dominance throughout the trucking industry has led to truck and seat designs that make it more difficult for the average size woman to enter and reach the controls of a truck. This graphic by Shea Anderson of Trucks.com exemplifies many of these differences. 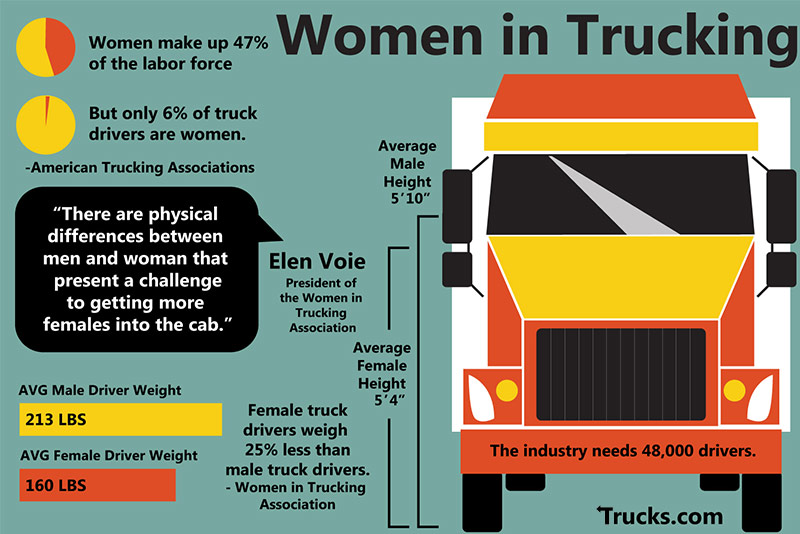 The Internet of Things is going to be one of the most influential parts of the shipping industry to impact the driver shortage in 2016. As more devices come online, key parts of the IoT, such as advanced analytics capabilities, route optimization schedules, data-tracking systems, ensuring all electronic logging device rules and hourly driving requirements are met, and freight consolidation, will be able to reduce the demand of today’s shipment and companies on drivers.

Additionally, the advent of driverless trucks will have the potential to completely eliminate the driver shortage when the federal government provides the necessary resources to make driverless trucking viable and safer.

For example, the government may need to build dedicated lanes as driverless trucks will likely average a speed of 45 mph and take advantage of aerodynamic principles through “highway trains.” Ultimately, slower-moving freight will equate to savings in fuel efficiency, and since these trucks will spend fewer hours stopped for gas, sleep or other activities, the shipments will actually arrive faster than currently available.

Thoughts for the Road on the Driver Shortage…

The driver shortage is worrisome, but the industry is changing. 3PLs are making freight consolidation and driver retention easier for major companies, and new technologies are being leveraged to reduce the workload of today’s drivers. Furthermore, changing stereotypes about women will result in redesigns of air-ride seats, which will make driving a truck more hospitable to women’s smaller stature when compared to the average size of men. The driver will continue, but does not have to be the “Trucker-magedon!” It simply means we need to re-evaluate where the industry is today and how it can have molded to bring in more drivers and meet shippers’ expectations.